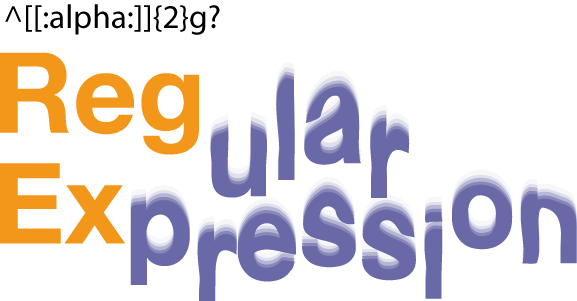 Most of the time we use structured data i.e. data as table. However, most of the available data are not structured. Indeed data can be as images, texts, web articles, etc… To be able to valorize these data is some kind of Graal for analyst of the near future. The quest has already started for the giants of the internet.

When working with data as text you are making the so called text mining. You can perform text mining for various reasons and numerous goals. It is possible to perform semantic analysis, there are stunning examples for the last american presidential campaign . We can aim at building a structured database from a text. There are as many tools as goals to deal with.

For more detail please look at the related wikipedia article for a concise definition.

First of all, it is necessary to put some theory in this post because with precise syntax there are precise rules. Several types of characters have to be taken into account, the literal characters and metacharacters.

Watch out, regular expressions are case sensitive (i.e the fact that there is a difference between capital and non-capital letters or upper case and lower case letter or A and a)!

Because it is useful to be able to search for these metacharacter, we can escape them, I mean make them literal using the \. ATTENTION, with R, in contrary to other programmatic languages, in order to make R understands that \ is used to escape a metacharacter, it must be escaped itself by a second \. Here in “\\$” the first \ escapes the second \ in order for R to escape $ (this post is dedicated to R users who would like to use regular expressions, there are variations with other scripting languages). R, in the example below, find the $ character in the second string.

To conclude, look for a “\” in a string is possible like the following example.

Here is a simple example. How to target words composed with the literal sequence “ex” which can be present at the begining the word or directly after the first letter.

Attention
The range given here “a-z” are just an example, “a-d” would also works, targeting the letters a b c d. The range “0-9” can be used as well.

Another example, this time we target words containing the literal sequence “re”, whatever its location in the words.

Attention
The expression [:alpha:] alone does not have the same meaning that the class like [[:alpha:]]. The expression [:alpha:] alone, targets literals “: a l p h”. The cases  below show explicitly this difference, but note that on the above example, there would be no difference thanks to the quantifier “*” (see below). Numerous groups of character exist, they are presented here for instance.

We can look for substracting characters from our targeting. This goal is achieved by using the metacharacter “^” inside a class of character like [^….].

It is possible to look for your regex at the begining or the end of a character string using the metacharacter “^” and “$”, respectively.

In term of positioning, a last metacharacter should be discussed. It is the  “.”. This one look for any character present at a defined location.  This means that after targeting a letter for instance, the “.” will take into account any other character that immediately follows. Here are some examples to understand the way “.” works:

Alternative targeting is also possible with the metacharacter “|”. To understand how it works, please look at the following example presented step-by-step.

NB: this example’s only goal is to explicitly demonstrate the use of “|”.The same result can be obtained without alternative targeting as you can see below.

Now, remember that one of the aims of this post was to produce structured data using regex. Below you will find a simple example. We have a character string in which names with initial(s) for the given names are present with or without space(s), dot, even numbers. How to automate this data structuration which can be used later on. The present sample is small, but with a bigger one, the coding effort would be worthwile.